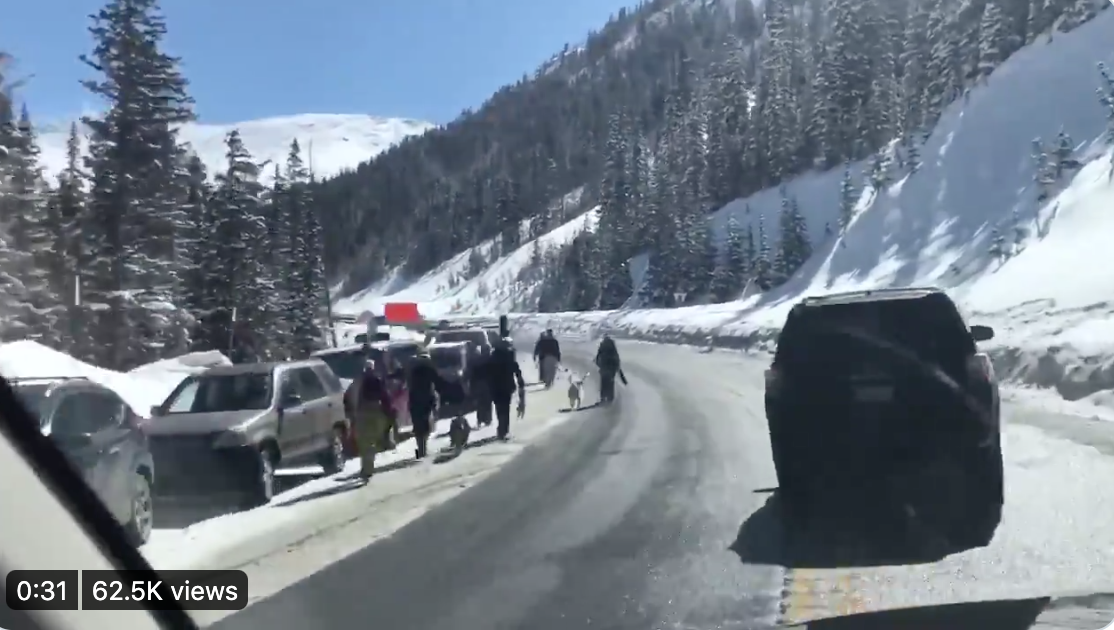 On Saturday, dozens if not hundreds of cars lined Loveland Pass so people could get their turns in while downhill operations at ski areas are closed across the state.

The area is a popular spot for people to hike or hitchhike to the top before skiing down. Parker the Snow Dog, the mayor of Georgetown and Loveland Ski Area’s mascot, posted a video of all the cars, many of which were parked illegally, and called out people for not social distancing. The video has since garnered more than 62,400 views, 579 likes and 174 retweets.

Come on folks. Let’s be smart. This is not social distancing. #MayorParker pic.twitter.com/on4ygQauRY

At one point in the video, Parker’s owner slows down to call out to some skiers grabbing their equipment out of the trunk.

“You know you’re parked right in an avalanche path, right?” he calls out.

The video has sparked intense debate. Some people are calling the video unfair, saying there is plenty of open space for social distancing. Others argue that the backcountry may be clear, but not the gas stations, restrooms or parking areas potentially used by skiers.

Gov. Jared Polis has encouraged people to go outside to avoid cabin fever. Some parks are seeing record visitation. Rocky Mountain National Park, Manitou Incline and Waterton Canyon have closed due to the outbreak. San Juan and San Miguel counties have closed their backcountry areas to non-locals.

Subscribe to our weekly newsletter, The Adventurist, to get outdoors news sent straight to your inbox.