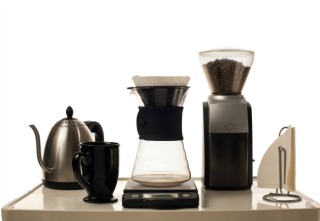 Coffee is a perpetual topic of interest, and for good reason: Almost everyone drinks it, almost everyone is passionate about it, and it’s pretty darn good for you. A recent post covered whether coffee breaks a fast or not. Before that, I told you how to make your coffee healthier. And on a regular basis, I cover something coffee-related in the weekly Dear Mark. One aspect of coffee I’ve never explored, however, is how coffee preparation and processing affects its health effects.

What’s healthier—filtered or unfiltered? Dark roast or light roast? Pre-ground or whole bean? French press or drip? Let’s get to it.

Filtered coffee includes drip, pour-over (unless you use a permanent filter that allows passage of the oils), and any method in which the coffee passes through a paper filter.

Cold brew coffee can be either filtered or unfiltered, depending on what kind of filter you use to strain the final product.

Conventional wisdom is scared of those oils because they contain two lipid compounds  called cafestol (great name for a coffee shop) and kahweol, high doses of which elevate cholesterol and suppress LDL clearance from animal models. That does sound bad; suppressed LDL clearance means LDL particles hang around longer in the blood to be oxidized and form atherosclerotic lesions. Do the animal mdoels transfer over to humans?

Maybe not. While 73 mg of purified cafestol a day for six weeks can increase cholesterol by a worrisome 66 mg/dL, the average cup of French press coffee contains between 3-6 mg; 73 mg isn’t a normal physiological dose. In one study, boiled coffee consumption was associated with a more modest 8% cholesterol increase in men and a 10% increase in women. That’s cholesterol, not LDL. Total. Besides, high fitness levels abolished the link in men, and boiled coffee was also linked to lower triglycerides in both sexes.

Or maybe. Another study found a modest association between high intakes of boiled coffee and non-fatal heart attacks. Then again, a similar (but smaller) association also existed with filtered coffee. Tough to say.

Both boiled and filtered coffee reduce the risk of type 2 diabetes, but only boiled coffee confers a lower risk of prostate cancer. Liver enzyme levels drop when you consume boiled coffee, and when you inject rats with a known liver toxin, boiled coffee protects them against the expected rise in liver enzymes. Most evidence suggests that coffee, whether boiled or filtered, is protective against liver cancer, liver disease, and mortality from chronic liver disease.

If you’re a heavy consumer of unfiltered coffee and you worry about the cholesterol issue, get it tested. Go for a full lipid panel, one that includes LDL particle number.

Coffee beans start out green and fairly uninteresting. It’s the roasting that brings out the flavors. The darker the roast, the longer it spends in the roaster.

Light roast advantages include less oil oxidation. The lighter the roast and the fresher the coffee, the lower the oil oxidation. Keeping it in whole bean form also increases the resistance, while grinding it prematurely will oxidize the oil and mar the taste.

Light roasts tend to have more caffeine, as the roasting process degrades caffeine. But caffeine content also depends on the bean; some have more than others.

Both are good, health-wise. Some studies suggest that dark roast has a better effect than light roast on antioxidant capacity in those who drink it. Light roasts tend to be higher in chlorogenic acids, which have been shown to improve subjective mood and ability to focus—even when the coffee is decaf. Medium roasts also have antioxidant effects.

Depends. I like whole bean, because keeping it intact until you’re ready to brew increases the oxidative resistance (more surface area means more oxidation), retains the aroma and flavor, and—this is seemingly minor but still important to me—I like the sound of grinding beans. The sound is a huge part of the ritual of coffee preparation. It’s the same reason instant coffee just isn’t the same as whole bean coffee. It’s almost too easy.

Healthwise, I imagine pre-ground beans are fine. Despite a huge number of people buying and drinking pre-ground coffee, coffee is consistently associated with health benefits in observational studies. If you believe the observational studies are pointing toward causality, ground coffee is good for you. And if you have the opposite relationship to grinding beans, and having whole coffee beans makes it less likely that you’ll drink coffee, go with the ground. It’s fine.

The quality of the water matters. Mineral content is the primary concern. A 2014 study sought to determine the optimal “hardness” for coffee water and found that the specific minerals causing the hardness made a big difference.

You don’t want too much bicarbonate. Bicarbonate is bad for coffee flavor.

I find adding a few dashes of Trace Minerals to my coffee brewing water helps the flavor.

My Favorite Way To Make Coffee

When you include coffee:water ratios, water quality, brew method, filter choice, ground size, and all the other variables, there are millions of ways to make coffee. I won’t get into all of them. I’m actually not a big coffee snob, although I do know a good cup when I taste it. I’ll just give my basic method.

That’s it for today, folks. I think I’ll go make another cup.

How do you make coffee? Tell me all about it down below.