A Look At Swerve Sweetener 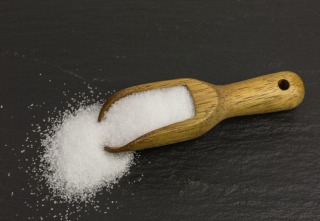 As we move into a new era of health awareness, there’s more variety than ever available to us. Overall, this is a very good thing—the average Primal consumer now has far greater access to a wider range of organic, free range, pastured, GMO-free, wholesome foods and products.

But this presents something of a dilemma when it comes to gray areas like sweeteners. While I don’t have much of a sweet tooth myself, I’m not a anti-sweetener purist either. While I lean toward stevia or monkfruit, I get a lot of questions about sugar alcohols, in particular a product called Swerve Sweetener, particularly from the keto crowd.

Swerve Sweetener is a “natural” sweetener blend. Loved by low-carb and keto bakers, Swerve provides a similar level of sweetness to sugar and an ability to caramelize, making it an easy sweet substitute in many recipes. According to the manufacturers, Swerve is “zero-calorie, non-glycemic and safe for those living with diabetes, since it has no effect on blood glucose or insulin levels.”

That all sounds dandy, but what’s actually in the stuff?  Swerve Sweetener is composed of erythritol, oligosaccharides, and natural flavors. Let’s break it down further.

Erythritol is a sugar alcohol that comprises the bulk of Swerve. In comparison to sugar, it’s said to be 60-70% as sweet and have a similar taste profile.

But that’s where the similarities stop. Containing a mere 0-0.2 calories per gram, erythritol is virtually calorie free.

As a sugar alcohol, erythritol is made from fermented glucose, usually sourced from corn. Considering Swerve uses only non-GMO corn, this probably isn’t too much of a concern for most folks, but it’s something to note. While the fermentation aspect is “natural,” there are certain synthetic processes along the erythritol production line, including hydrolysis to extract the glucose from corn or other fruits/veggies, and a crystallization phase to form the final product.

All in all, not too bad as far as sweeteners go. The scientific literature is positive regarding erythritol, showing no adverse effects on blood sugar and demonstrating beneficial effects on vascular function and oral health. Swerve also claims that erythritol is non-allergenic and less likely to cause digestive issues than other polyol sweeteners like xylitol. Good times.

Next down the ingredient list are oligosaccharides. These are a type of prebiotic fiber otherwise labelled as inulin, providing additional sweetness for your tastebuds and a beneficial food source for all the little good guys hanging out in your gut. The oligosaccharides found in Swerve are likely sourced from starchy root vegetables like chicory root, onions and garlic.

Once again we have an ingredient that’s natural (in origin, at least), provides a beneficial effect in the GI tract, and doesn’t adversely effect blood sugar. That being said, those folks sensitive to FODMAPs might not react well to Swerve, on account of the oligofructose found in plants like chicory root.

This is where Swerve lets the team down a bit. Under the FDA’s Code of Federal Regulations, any compound can be deemed a “natural flavor”, provided it was sourced from something natural. All well and good. But there’s very little legalities surrounding how that natural compound can be processed to form the end product (aka the natural flavor): it could be fried, distilled, squashed, roasted, acidified, discombobulated, or all of the above – just whatever takes the manufacturer’s fancy.

And by the time that natural compound makes it into your sweetener, it’s no more natural than the artificial flavors in the cheaper sweeteners further down the aisle. Can this flavor really be considered natural, then? I think not.

What’s more, Swerve has no legal obligation to disclose what that natural flavoring was actually derived from. On their site, there’s vague references to “natural flavor from citrus”, but really that doesn’t mean a heck of a lot in the grand scheme of things.

The Science On Swerve

Once again, the literature is overwhelmingly in favor of Swerve Sweetener. With regards to erythritol, high-dosage trials in rats (up to 4.6 g/kg) failed to show any chronic toxic or carcinogenic effects. Human trials at lower dosages (1 g/kg body weight—still a decent amount) didn’t reveal any gastrointestinal concerns or digestive upset, aside from higher fluid intake. That being said, there are anecdotal reports of some people personally not taking well to the stuff.

On the oligosaccharide front, it’s also reasonably smooth sailing. Oligosaccharides like those used in Swerve have been positively associated with improved gut microbial health and permeability, but there is a certain propensity for prebiotics like these to increase flatulence and have a mild laxative effect. Fair warning. Maybe it’s another reason to embrace the adage “a little goes a long way” here.

Then there’s the natural flavors. There’s not a lot I can speak to here, not being privy to the actual contents of said natural flavors. It’s worth noting, however, that while the FDA requires natural flavors to be sourced from compounds that are considered GRAS, there have been times when GRAS ingredients and products have been taken off the shelves because the FDA didn’t do their homework.

At face value, and even below the surface, there’s nothing to complain about: Swerve Sweetener really does seem like the real deal. But it’s not my favorite sweetener when I reach for one, especially when I get that strange cooling sensation on the tongue after eating something sweetened with it.

But the fact remains that most people tolerate Swerve well, and it’s won over much of the keto crowd—arguably some of the most discerning of all foodies. If you’re looking for a new sugar substitute, play around with Swerve, maybe mix it with other natural sweeteners to optimize taste, and see whether it works for you.

Thanks for reading everyone. Whats your take on Swerve? Do you use it? Tolerate it well? I’d love to hear your feedback.

The post A Look At Swerve Sweetener appeared first on Mark's Daily Apple.